The 241 Filipinos on the Costa Diadema who were found to be negative after swab testing came ashore at 12:00 this morning. The seafarers will be transferred to Lombardy with specially protected coaches in accordance with safety regulations. From there they will fly back home. 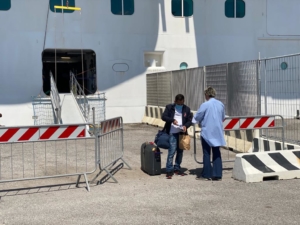 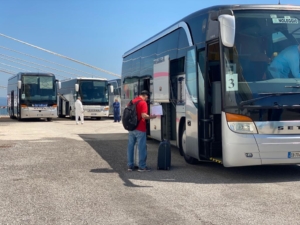 The coaches, 20 in all, arrived around 10.00 a.m., stopping first at the “support area” and then – after the go-ahead from the Port Network Authority – at the “sterile area” on board ship. Each vehicle will host about 12 seafarers kept at an appropriate distance from each other.

The ship has been berthed at the port of Piombino since March 30th. Currently there are still 743 people on board.

“It was a moving moment,” said the head of the Port Network Authority’ territorial office in Piombino, Claudio Capuano, who spoke live on Italian television on Rai1’s program “Storie Italiane” conducted by Eleonora Daniele.

“It is the first time, since the ship arrived, that so many seafarers have been disembarked all at once” – he continued – “I have to say that the operations have been carried out in complete safety thanks to the coordination and cooperation that the police forces and all the institutions have managed to set in motion during this emergency. At this point, we hope to be able to disembark all the other seafarers left on board soon. After months at sea they deserve to return to their homes and their loved ones.”

The new wave of the pandemic that has swept through some ports in southern China, creating

ITF Seafarers Trust donates 200 oxygen concentrators. They could save hundreds of lives

The new wave of the pandemic that has swept through

ITF Seafarers Trust donates 200 oxygen concentrators. They could save