Livorno- preparations for the excavation work on the Microtunnel are underway. In the construction site opened in front of the Marzocco Tower, on the west bank of the Darsena Toscana, the cutting head of the mechanical ‘mole’ that will dig the tunnel between the two banks of the port’s harbour access channel was lowered this morning.

The Tunnel Boring Machine (TBM), which is 13.5 meters long and weighs almost 100 tonnes, will be driven remotely by a Spanish expert, Rafael Sanchez, one of the few people in the world with over 20 years’ experience in the sector. The machine will work continuously for 10/12 hours a day digging 234 metres of tunnel towards the opposite bank, towards the Calata del Magnale, where the end of the tunnel will be located, a site area where the recovery shaft is to be found.

The challenge begins today: the first part of the tunneling machine has been lowered to a depth of 25 meters. The cutting head alone weighs 57 tonnes and is equipped with a series of “teeth” capable of boring the ground and overcoming the resistance of the water. In the afternoon, its second cylinder will also be lowered, no less important than the first, because it is the one that contains the hydraulic pumps and motors. The operation will be completed between today and tomorrow with the assembly of the machine.

The final objective is to be able to install the new pipes that will link up the Stagno refinery with the Darsena Petroli Oil terminal in the underground tunnel and remove the old ones. The old pipes are currently annoyingly positioned deep down along the banks of the only way in and out of the Darsena Toscana and create havoc for large ships during maneuvers, as they limit the navigable part of the 90-meter-wide channel, to only 67 meters.

“In the first week of December we should be able to recover the machine from the Magnale shaft,” says works director Matteo Baroni. “At that point” – he adds – “the tunnel will be handed over to Eni, which will put in the new pipes and, subsequently, remove the old ones. Once the work is completed, the channel will have a navigable section of 120 meters.

It will take about a year and a half to get the “new” channel widened. 10 months to lay the new pipes, at least three months to remove the old ones.

However, day one has a strategic importance for the port of Livorno: “It represents the first important step towards completing the Microtunnel” said the President of the Port Network Authority, Luciano Guerrieri. “While we are waiting for the Darsena Europa seaward expansion project and the new container terminal to be completed, the modernization of the access channel is fundamental for allowing the port to remain competitive and attractive.” 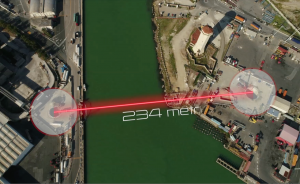 Livorno, the boring machine dug 234 meters at a depth of 23 meters from the coastline

In the first eight months of the year 3.6 million passengers transited through the two ports

Livorno, the boring machine dug 234 meters at a depth

Livorno, the boring machine dug 234 meters at a depth

First part of the boring machine for the tunnel under