After maritime gigantism, now commercial gigantism is all the rage. If ever-larger ships have begun to crowd the world’s seas, putting a strain on the infrastructural resilience of many European ports – clearly unable to welcome  and handle giants that in some cases have exceeded the 24,000 TEU capacity  – today terminal operators are grappling with the new, unprecedented problem of operational efficiency, represented by the progressive increase in the quantity of cargo that ships are carrying for each call at their  chosen port.

In fact, congestion problems, which negatively affected many ports during the pandemic, and volatile market demand have prompted carriers to revise their schedules and reduce the number of port calls in each rotation.

Therefore, to maintain market volumes, each containership had to carry a larger amount of cargo for each individual vessel call, forcing terminal operators to work harder to process all loading and unloading operations.

This excessive workload has eventually damaged the productivity of many container terminals in Northwest European ports, according to Drewry in its latest report.

The Ports & Terminals Insight shows that the average time required for calls at major Northern Range ports increased by over 50 % in the first quarter of 2022 compared to the same period in 2019. In May, the extra time vessels spent in ports settled at +37%.

According to Drewry’s analysis the average goods transfer time per call  peaked at 2.3 days in February, a 58% increase over the pre-pandemic average in 2019. 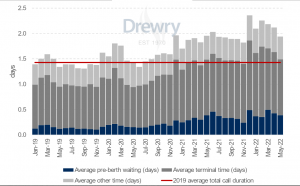 60% of the time in port was taken up by cargo loading/unloading operations carried out at the terminal (average terminal time). On the other hand, 20% of the total time spent was absorbed by accumulated delays due to queues in the outer harbour waiting to berth (average pre-berth waiting).

The major North American West Coast ports have been even more heavily affected by delays caused by  longer pre-berth waiting times, accounting for over 55 % of the average amount of time required for vessel calls during the reporting period.

On the other hand, what brought North European ports to their knees has been the increased volumes of cargo transported by each ship. The downturn  in port productivity in Northwest Europe occurred despite the fact that current throughput levels appear to be weaker than in the pre-pandemic period.

In fact, in the first quarter of 2022, traffic through Antwerp, Rotterdam, Bremerhaven, and Hamburg fell by 3.5% compared to the same period in 2019, and the reduction  in the number of calls was even greater: 15.1% less.

Calls have decreased, traffic has declined. However, the volume of trade per call has increased. Over the past three years and through the first quarter of 2022, each ship has transferred an above-average amount of cargo: 14 % more on average.

According to Drewry, over the last three years up to the first quarter of 2022, there has been a 20% growth in traffic volumes at the port of Antwerp and +12% at Bremerhaven. As a result, both ports have seen the productivity of their terminals deteriorate by over  30%.

Ms Hadland said that the sharp increase in cargo exchanges was  presenting terminal operators with challenges not unlike those they  faced due to vessel upsizing.  She pinpointed up the difference as follows: “vessel upsizing  was planned well in advance, whereas the 2021-22 ramp up in cargo exchanges have happened much faster and with little notice.”

The new facility will have a 7 million TEU capacity. Operation in partnership with Hutchison Ports

The company, owned by retail giant Lidl, has completed its