This afternoon the splendid setting of the Old Fortress set the scene for the presentation of the preliminary design of the coastal defenses and dredging activities of the Darsena Europa, the seaward expansion project with which the port of Livorno aims to conquer new traffic quotas, especially in the container segment.

In front of a large audience, and in the presence of the Minister of Infrastructure and Transport Paola De Micheli, the President of the Northern Tyrrhenian Port Network Authority ,Stefano Corsini, illustrated the content of a project that includes the protection of the new sea entrance to Livorno port (northern entrance), the new Darsena Europa harbour basin with its access channel and the related dredging activities.

The dredging operations are designed to provide the foundations for the new works, deepen the access channel seabed to -17 metres and create basins and internal docks (the new container terminal dock at -16 metres, the Santo Stefano basin and the surrounding seabeds at -13 metres).

If the dredged material cannot be used to remodel the submerged beaches along the Pisan coast, it can be deposited inside a new containment basin of suitable capacity, located in the new Darsena Europa harbour basin and delimited, seawards, by the final section of the Diga Nord breakwater and, internally, by stone embankments. This containment basin will be the basis for the construction of the yards of a new terminal dedicated to Sea Motorway traffic, which is planned in the second phase of the Darsena Europa project. In addition to the containment areas at the base of the Diga Nord breakwater, a second containment basin is also planned between the new Diga Sud breakwater and the Marzocco breakwater.

The Darsena Europa will be equipped with a turning basin with a useable diameter of 600 metres and a depth of 16 metres. As foreseen by the Port Masterplan, also the seabed in front of the quay of the future container terminal will be dredged to -16 meters, but it is expected that the work will be designed in such a way as to allow an excavation of up to -20 meters.

Thanks to the completion of the planned works, it will be possible to divide the harbour’s vessel traffic by type of goods between the new mouth to the north and the one to the south, which will help to improve the safety of shipping (and work).

All the planned works will be clearly subject to an Environmental Impact Assessment, during which great attention will be paid to the preservation of the sedimentary balance of the Pisan coast.

“The preliminary design of the breakwaters and dredging work will give a strong impetus to the construction of the Darsena Europa. This is a decisive, tangible step forward. Now we can no longer go back,” said Corsini.

“Darsena Europa is not only a strategic asset for the coast but represents the future of the city and the Tuscan region, with positive repercussions also from an employment point of view: the aim is to employ one hundred people a day for about two and a half years.”

Speaking during the initiative, the Minister of Infrastructure and Transport Paola De Micheli expressed a clear position towards the project: “I am here to communicate formally, and with a certain solemnity, that the Ministry will do everything possible to support, not only from a procedural point of view but also financially, the construction of the Darsena Europa.

“We want to support this project because Livorno’s role in the national and European port system is very clear to us, and, likewise, the role that an efficient and modern port has to play in facing and hopefully overcoming the infrastructure challenges of the 21st century.” 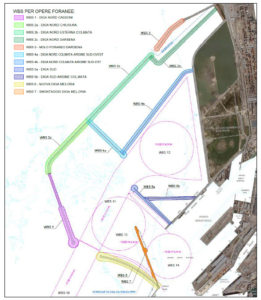 Simulations for the entry of 24,000 TEU ships successfully completed in Genoa

In an interview with Il Tirreno the Minister confirms funds

Simulations for the entry of 24,000 TEU ships successfully completed