As of today, the city of Livorno will have a library entirely dedicated to the sea, ports and logistics.

With a collection of 1,000 volumes, including major works (repertories, monographs and series) on shipping, the Old Fortress and, more specifically, the Palazzina del Capitano –home to Livorno Port Center – will be the place to go  for students, curious citizens and enthusiasts of maritime-port history and culture.

“To restart in the post-covid period with the opening of a new library is quite something,” Cristina Luschi, head of the provincial Document System Network, said during the opening ceremony. “This place of culture will become part of a network of sixty libraries, all located in the Livorno area. Thanks to Internet, and a particularly high-performance online reference tool, anyone interested will be able to browse the catalog of books,” she concluded.

The library collection, partially consisting of volumes already available to the Port Network Authority, and partly of books from private donations (some of which belonged to Giuliano Gallanti, the late president of Livorno Port Authority), will be open every Tuesday, Wednesday and Thursday, from 10 a.m. to 7 p.m. From June 15th , summer hours will come into effect, with a new timetable to be announced later.

“Even in the digital age, there is no substitute for books,” said Port Network Authority  managing director Matteo Paroli. “The library represents humanity’s long journey toward a better quality of culture,” he added.

I like to think, that through their books, the passions of men who helped make the history of our ports can survive, cataloged and well-ordered. As from this moment we can travel together with them down a new road along the pinnacle  of knowledge. I would like to thank  my  colleagues at the Port Network Authority and  those who helped make this happen,” he concluded. 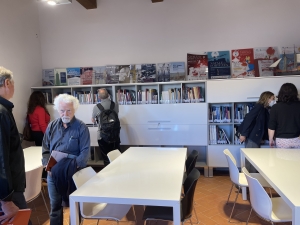 The Raccordo rail project is about to take off. RFI programme contract funding approved

Yesterday, the port welcomed 7 cruise ships and 9,000 passengers at the same time

The Raccordo rail project is about to take off. RFI

The Raccordo rail project is about to take off. RFI

Located in the Port Center inside the Old Fortress, the