Although the proliferation and high contagiousness of the Omicron variant risks making the situation even worse, the long-standing crew-change problem seems to be gradually subsiding.

The Neptune Declaration Crew Change Indicator provides an up-to-date picture of the development of the crew change crisis. During the peak pandemic phase it affected over 400,000 seafarers, forcing them to work on board ships for much longer periods of time than their contracts stipulated.

As of December 15th, the number of seafarers still on board after their contracts expired  had fallen by one percentage point compared with the previous month, from 4.7 to 3.7%. This is the lowest figure since the introduction of the index last May.

Not only that, the report based on a sample of 90,000 mariners also shows that the number of seafarers on board for over 11 months has now dropped from 0.7 percent to 0.4 percent. 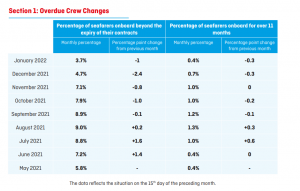 Another factor to consider is the substantial rise  in the number of vaccinated seafarers. As of December 15th, 59.8% of the 90,000 crewmembers sampled had received one or two doses of the vaccine. There had been a 10.3% increase over the previous month. Since August, the number of  vaccinated mariners has been consistently growing.

To make a comparison, one only needs to consider that the share of the population fully vaccinated against Covid-19 in the European Union is 56.6%, while in Hong Kong, Japan, Singapore, the UK and the USA, the vaccination rates are 63%, 79%, 83%, 71% and 62%, respectively.

This demonstrates the progress made in vaccinating seafarers: vaccination rates in the sector are in fact increasingly close to, and in one case higher than, those of populations in the countries concerned.

The figures are therefore encouraging, even if some critical issues still remain to be solved. First of all, the resurgence of the virus is worrying: the spread of the Omicron variant could have a negative impact on crew changes. Several countries in Asia and Europe are in fact re-imposing new restrictions on crew rotation, with the cancellation of flights and the imposition of extended quarantine periods.

Kasper Søgaard, Managing Director of the Global Maritime Forum, said that the Neptune Indicator data was encouraging but did not consider the impact that the Omicron variant could have on crew changes. In his opinion, the shipping industry and local governments has to do everything they can to circumscribe the effects of the new variant to prevent the crew-change crisis from flaring up again.

Moreover, according to the 850 companies and organizations that signed the Neptune Declaration on Seafarer Wellbeing and Crew Change, some seafarers are still reluctant to be vaccinated. Available vaccines are still scarce or unrecognized in certain  geographic areas. Accessibility to booster vaccine also remains prohibitively expensive and is a challenge to overcome.

Another difficult  issue is the fact that in some countries the validity of the vaccine has been reduced to six months, which has led to  a number of crew change problems.

Their marine safety campaign kicks off today. The aim is to create a safer work environment

Their marine safety campaign kicks off today. The aim is

Aniformar and Conformar are critical of the MIMS decision

A new Memorandum has been signed in Livorno to continue